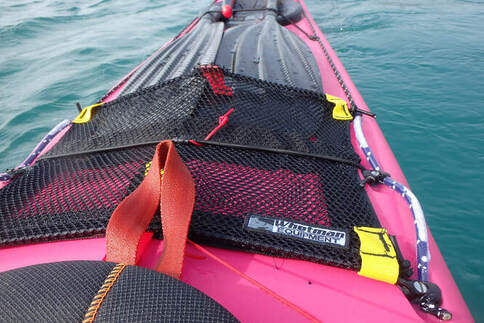 The deckline is the right size to thread most deck anchor fix points. In this image it runs through some tubing to provide grab handles for swimmers and then is one continuous line to the bow and back to the port side deck mount.

​10 metres is sufficient line to thread and replace deckline at the bow and stern of a sea kayak.
​

When did you last replace your toggle lines? Given Toggle cords are often forgotten bits of rigging we now offer toggle replacement kits to remind people that they dont last forever and are a bit of critical rescue kit being the first contact point for swimmers. Stress points build up mostly from repeated flapping whilst in transit for hours at a time on a vehicle roof. This can cause failure during use, at worst during a rescue. The reflective cord is a kernmantel polyester & so much stronger & more robust than standard toggle cord.
6mm reflective cord 2 x 75cm Toggle Line Kit                                                                   Toggle Line Kit + Rescue Rings
Toggle Rings
Tie a ring onto the toggle line cord opposite side to the toggle and higher (shorter) than the toggle position. This anchor point is the strongest point to connect the boat. It will offer the strongest most robust tow connection point. The ring is an obvious and easy target to clip for a tow and allows tows to be directed from the very bow or stern of the boat giving better control. Tie the ring so that the cord is loose and the ring can move about; therefore allowing the ring to move around in any direction if thrown by waves and wind and this is important to give the towline snapgate connector freedom to move. This will give excellent flexibility for the snapgate connector and make the issue of an accidental unclipping of the gate very unlikely.  Conversly do not be tempted to rig the ring so that it is standing static and fixed on the boat because that may cause a snapgate connector to unclip off the ring during use.
STORE